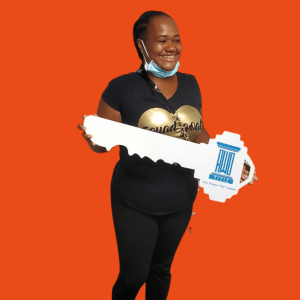 How a Vision Board Sparked a Homebuying Journey

Last year, Sharron added an image of her dream home to her vision board.

She wanted three bedrooms, one and a half bathrooms, her own yard and no homeowner’s association fees.

HomeFree-USA helped her turn that vision into a reality.

Though she had started the homebuying process before only to stop mid-way through, “it was coming through the doors of HomeFree-USA and working with Freda that really pushed me to stay focused,” she says.

Freda, Sharron’s Homeownership Advisor, looked at her budget and her credit and made some recommendations. “Then she would check on me and say, ‘Hey, what’s going on? What are you doing?’ That push really helped me.”

Sharron also made some sacrifices to lower her debt and come up with the money she needed to buy the type of house she wanted.

HomeFree-USA connected her with Asa C. Council of Prosperity Home Mortgage. Sharron was happy to learn that she was eligible for down payment assistance, and part of her closing costs were paid by the seller.  “I only had to come to the table with $4,800,” she says.

Since she didn’t have to use much of her own money for closing, she used her money to change the carpet, get the house painted and have the cabinets refinished. “I wanted it to be a certain way,” she says. “I added a little value.” Once she closed on her house, she also bought another car.

Today, Sharron is happy to say she has been able to cross her house off of her vision board.  “God gave me a vision,” she says. HomeFree-USA helped to bring it to fruition.