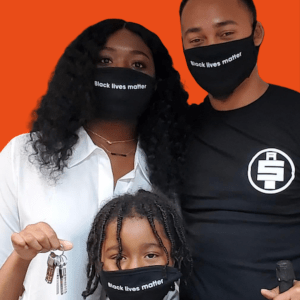 While many 25-year-olds are thinking about their next job or next big social event, Ishmail has his sights set higher. “I’m looking for financial freedom,” he says. “I figured real estate is a good way to build some generational wealth.”

Not only is he looking for a better future for himself, but he is creating a safe haven for his seven year old son. “I have to make sure he has somewhere to always live,” Ishmail says.

Ishmail wanted to make sure he had as much information as possible so he contacted HomeFree-USA after learning about them from his realtor. His homeownership advisor, Freda Williams, gave him some guidance into what to consider when searching for a home, as well as advice on managing his credit and making sure his finances were mortgage-ready. “She really gave me some insight on things that I didn’t know in just a few conversations,” Ishmail says.

After working with HomeFree-USA, Ishmail was approved for a mortgage and today he is a proud homeowner. “It’s very fulfilling when you come home to something and you know you can call it yours,” he says. Even the small things are exciting, such as having the freedom to drill four halls in the wall and hang up his television.

Ishmail has also inspired many of his friends – those his age and those who are older. Some of them have dreamed of owning a home but have not tried because they thought it was not possible. “I’ve convinced five people to go to a first-time homebuyer’s course, and I started giving them little credit tips,” he says. “I told them, ‘if I can do it, I can help you do it, and we all can get better and better.’”

Ishmail likes the idea of making money off of the land he lives on. “If you don’t want to waste money on rent and pay for somebody else’s retirement, this is the route to go.”