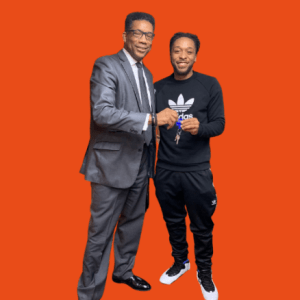 Think you’re too young to start thinking about homeownership? A 20-something firefighter gets an early start on his financial dreams.

Some would say that if you’re single and in your 20s, you have plenty of time to settle down and buy a house. While that may be true,  27-year-old AcQuan saw the wisdom in getting an early start on reaching his financial goals.

“You’re not getting anything from renting so in my opinion you’re wasting money,” AcQuan, a firefighter, says. Plus, AcQuan always dreamed of having a house of his own.  “I wanted something I would be able to pass down to future generations.”

With a can-do attitude, AcQuan knew he had to get his credit straight to reach his goal, so he kept his debt down, paid his bills on time and spent his money responsibly.

However, getting all the paperwork that he needed to apply for a mortgage was tedious, and he was happy to have HomeFree-USA there to guide him through what could have been an overwhelming process. “Homefree-USA worked with me directly through the loan process,” AcQuan says. “Without them, I don’t think my loan would have been approved.”

One of the biggest lessons AcQuan learned was patience, and he took advantage of the resources around him. “You want to think before moving too fast,” he advises. In fact, he sought advice regularly from his homeownership advisor and his realtor.

Today AcQuan is the proud owner of a house in Washington, DC.  Homeownership has made him more financially responsible, he says. “It made me want to get my spending habits right.”

It has also empowered him because he knows he has so many options.

“Once you own, you can pass your house down to your kids or other loved ones or sell it,” he says. But AcQuan doesn’t recommend selling. In fact, he’s even interested in possibly owning multiple homes that he can then rent out. “That would provide another source of income, which is great to have,” he says.